Celebrations marking Eid al-Adha provided a brief intermission in Algerian politics, which have become more active since the end of summer holidays. And with the conclusion of the Eid came the answer to the episodic question: Where is President Bouteflika?

Before the Eid, the return of General Othman “Bachir” Tartag to public life as President Abdelaziz Bouteflika’s advisor signaled the beginning of the fall political season in Algiers. Tartag’s reappointment preempted rumors of a broader cabinet shuffle, including the potential replacement of Minister of Energy Youcef Yousfi. The cabinet shuffle may still be in the offing, but thus far, Bouteflika seems to be privileging incremental steps rather than an overhaul of his team.

Elsewhere among the president’s men, Minister of Foreign Affairs Ramtane Lamamra is garnering more and more support for Algeria’s approach to launching a political dialogue to address the crisis in neighboring Libya. His initiative demonstrates that when Algeria does indeed decide to engage diplomatically in the Maghreb, it can be influential. Lastly, Bouteflika once again put to rest speculation about where he in fact was and appeared in Algiers alongside Algeria’s most renowned diplomat, Lakhdar Brahimi.

On a separate note, I wanted to share a backgrounder I wrote on Jund al-Khilafa in Algeria for The Tony Blair Faith Foundation.

The commentary is here. The foundation’s design team made a great graphic:

I also discussed France’s Operation Barkhane on France24. Video is here, and another great map: 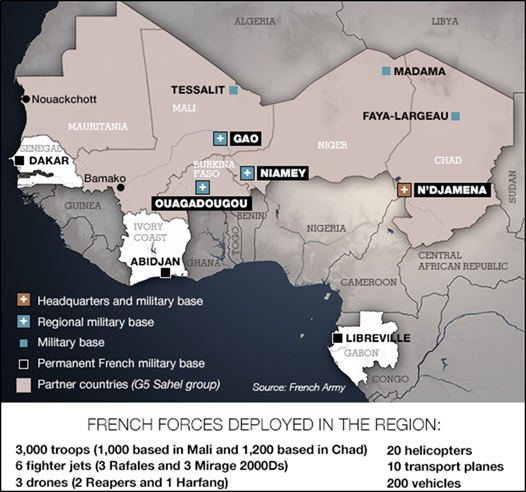